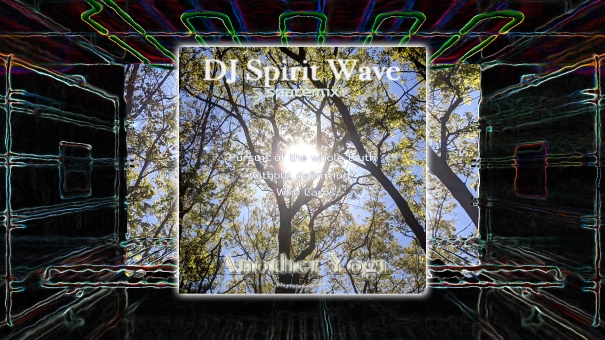 The proof of the pudding is in the listening, so listen to my meditative pudding already…🙃🙂

Here’s the Mixcloud location of the spacemix, in case YouTube copyright demands take down (or you just dig Mixcloud more here)…

With that stellar post introduction out of the way (and sarcasm in full yogic swing), and the sound of the pudding in your ears now (cuz you are playing it, right?), there really isn’t much more (if anything) to say here.

That said, I will kinda echo some of what I wrote earlier about this spacemix, in case you missed it…

Another Yogi, in addition to being the newest refinement of my evolving spacemixing technique that expansively allows for intricately more immersive sound textures and depth (often like combining soundscapes with intricate visionary art in superconscious space), focuses upon the meditative mindset that we all need at balancing times — preferably helping to connect each one of us to the truest essence of who we really are.

If you are a busy person pressed by the seemingly chaotic and complex thrust of unhealthy stress, this spacemix is for you.

I enjoyed crafting this spacemix so much, that I have decided to make Another Yogi into a series of releases expressed with pure natural authenticity to help us all escape the harmful conformance that we all sometimes must bear in the name of a certain type of mainstream predictability.

Abandoning the Psyonics brand for the sake of nice simplicity, I “herefore” am going with DJ Spirit Wave. However, I am not your typical DJ. Instead of being a live DJ, I am an audio sculpting DJ. That is still all to be said about that in the name of brevity here.

Originally going to be called Other Yogi, a name that healthily activates the mind to spark mystery and hopefully interest, Another Yogi ostensibly carries that same mental effect, but also allows me to share an apparently rare yogic practice to expand a different kind of health coverage.

There are people who simply practice yoga for the sake of stretching, often taking a class at a gym.

Swinging the pendulum to the other extreme, there are people who most powerfully immerse themselves within a very complex and hierarchical infrastructure (with an equally complex set of rules) of spiritual belief. Rigid conformance is there, albeit disagreement over that rigidity for thousands of years has blossomed many variations of those firm rules.

My yoga practice basically feels like a work of visionary art. It contains the critical focus upon proper meditative breathing usually left out by people preferring simple stretching and such, while allowing for the freest expression of energy that is the totality of existence and seamlessly my place within it.

Aside from learning how to correctly hold and transition between poses, there are no rules, except what I call the Rule of Reality — a rule simply stating that actuality can only be reality’s perfect stability, one that serves our health and defies that health in strict accordance with that stability.

I do my best to adapt in every pose to the energy of the present moment. How I do that is ultimately purely based simply upon who I am within that moment. Burn is good, pain is bad (the latter prompting an attempted adjustment optimized for my health at that moment).

My yoga practice often includes carefully crafted blends of cannabis strains. Having seven (or such) high-quality strains vaporized in a high-quality vaporizer to achieve extraordinarily intricate neurological effects undeniably contributes to the visionary artistry effect. But in addition to being an indescribably cool and trippy experience, there is a strong increase in my physical awareness that allows for a much more accurate yogic tuning.

Properly vaporized cannabis leaf (not the vape cartridges tragically prompting the popularly reckless demonization of vaping) is a seriously powerful tool towards understanding the yogic journey in my experience.

While too many people believe that cannabis (and other psychedelics) are the thieves way to enlightenment, I wholeheartedly disagree.

The responsibly used psychedelic class of substances conveys meditative oneness in a way that is far more difficult to achieve just via words, sober rituals, and/or so on.

Psychedelics powerfully reveal to us clearly how the boundaries drawn by the mind to define our perspective of reality are not really there. Mainstream physics fully supports that conclusion in stating that existence is energy.

My yoga practice is all about tuning my balance (so basically health) in a way that allows extremely flexible adaption, and better managing the boundaries that my mind inevitably needs to draw to identify food, loved ones, threats, and so on in a way that avoids taking those boundaries too seriously.

Another Yogi is about casually inviting people (e.g. you) to join us along this boundless journey to improve our connection within reality.

You are all invited in equal measure. There can be no discrimination ultimately when it comes to the Rule of Reality.

Another Yogi is available for your ears to pass on to your brain, and the last song therein is my new Stress Health release titled Thank Zendo, which has its own very-soon-upcoming post fwiw. 🙂🙏

I am an honest freak (or reasonably responsibly balanced "misfit", if you prefer) of an artist working and resting to best carefully contribute towards helping society. Too many people abuse reasoning (e.g. 'partial truth = whole truth' scam), while I exercise reason to explore and express whole truth without any conflict-of-interest -- all within a sometimes offbeat style of psychedelic artistry.

"There are some things so serious you have to laugh at them." – Niels Bohr

Feel free to join us in seamlessly riding our boundless community waves.

Fun through serious, my carefully formed results are honest and usually offer a freshly unique view.

Those with * leave this journal.

Follow Spirit Wave Journal on WordPress.com
Community
Thank You
Thank you for your undeniably necessary role for (and as part of) my beloved 3Fs (family, friends, and fans).
Follow
Help Needed

Helping raise awareness and any other constructive way to participate in our growing community is equally appreciated.

Spirit Wave (“entertainer” herein) disclaims that entertainer only publicly posts content (“entertainment” herein) for entertainment purposes only. You (the reader of this sentence) agree to the fullest extent permissible by law that entertainer is not liable for any damage. Moreover, entertainer never advocates breaking the law, so any expression involving drug use is addressed solely to anyone capable of lawfully engaging in that use.